Polycare Research Technology GmbH & Co. KG was founded in 2010 by Dr Gerhard Dust and Gunther Plötner in Gehlberg, Thuringia. The idea to found the company arose in response to the need to house people affected by natural disasters. Polycare developed a system to construct robust buildings from pre-formed, plug-in building blocks. The entire manufacturing and construction process is designed to be sustainable and socially responsible. The building blocks are made of mineral aggregates (gravel, sand, rock flour, etc.) and polyester resin as a binder. Thanks to the system of pluggable building blocks, buildings that can be individually designed can be erected in a very short time without any special training. The elements are cast on site in the respective countries. This keeps transport distances short. Polycare has set up its first factory in Namibia with 35 employees and plans to expand production to other countries in the near future.

Polycare has already built model houses in southern Africa. This helps to ensure the social acceptance of the alternative building materials and methods. In order to be able to expand the construction of buildings to other regions, the Polycare construction elements and the architecture of the buildings must be adapted to the respective climatic and cultural requirements. To this end, Polycare is working with the Research Center for Design and Architecture in Boisbuchet, France. In interdisciplinary workshops with architects and students from all over the world, specific problems are to be worked out together and practicable solutions identified.

The company’s distinctive approach and the results of the project

With its innovative plug-in system with building blocks made of polymer concrete, Polycare empowers people to construct environmentally friendly and durable buildings independently and without the need for appropriate training in the shortest possible time. Through the use of local raw materials for the construction elements and through local production, the project achieves social and ecological effects. The reusability of the building elements and the avoidance of waste and emissions on the construction site opens up – for the first time in the construction industry – a business model in the sense of the circular economy. The production of the polymer concrete is also more climate-friendly; compared to conventional concrete, 60 percent less CO2 is emitted. Polycare thus offers an environmentally friendly and social response to the need for housing and social buildings in developing and emerging countries, thus directly addressing those affected.

How the prize money is used

Polycare uses the prize money to organise workshops with international architects and students. The aim of the workshops is to adapt the buildings to the climatic and architectural requirements of other target regions. The participants design different types of buildings and finally also construct a Polycare building on site. This will serve as accommodation for upcoming students and teachers. 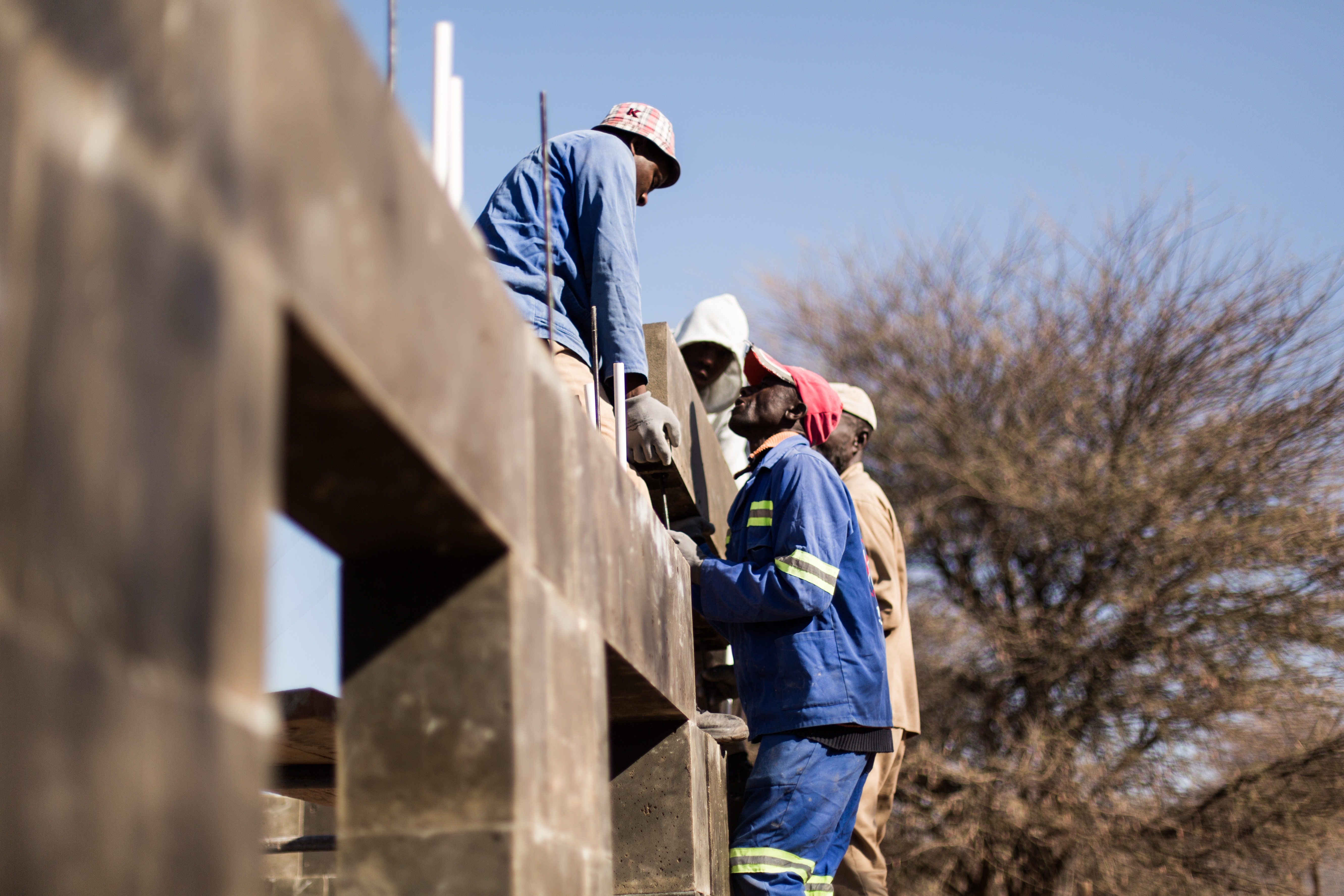 ©Polycare
Construction of a show house. Polycare’s own production facility in Namibia has already created 35 jobs. 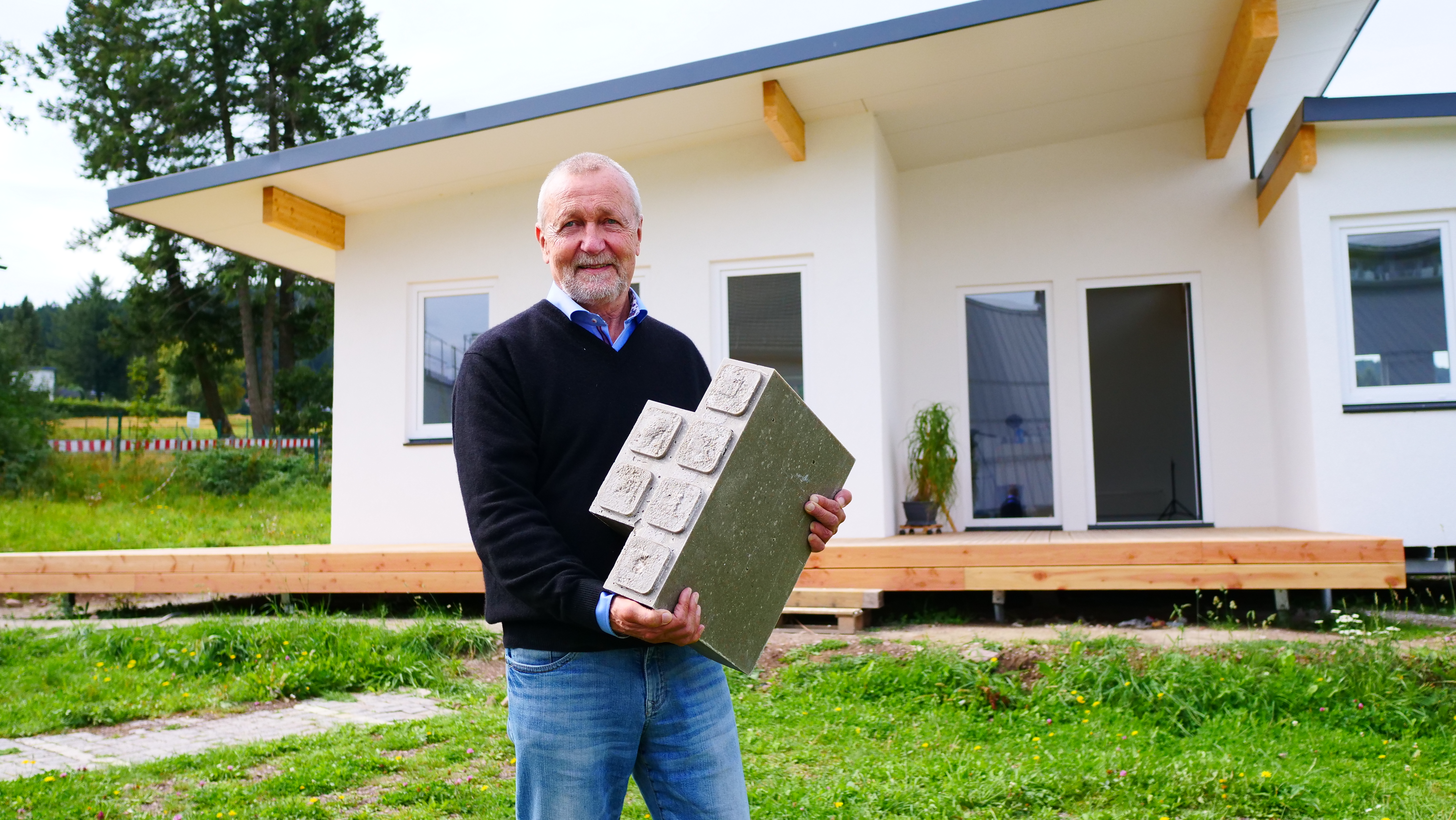 ©Polycare
Dr Gerhard Dust, the founder of Polycare, with a plug-in building block made of polymer concrete, with a model house behind it.

Polycare has set out to create housing in the crisis-ridden countries of the global south. The houses are to be solid and yet easy to build. To achieve this, the company uses an innovative plug-in system. The elements are manufactured locally, the plug-in principle is similar to that of the well-known Lego bricks. Polycare uses locally available building materials, such as desert sand, for its building blocks. Another advantage is that no water is needed for construction.

The team led by company founder Gerhard Dust was able to present the construction system to a wider public using an example house at the Architecture Park in Boisbuchet, France. Like all the innovative residential buildings shown there, the Polycare show house will inspire architects and students in the future and exemplify solutions for future-oriented green building.

PolyCare’s future-oriented, resource-saving construction method has already received recognition from UNIDO, the United Nations Industrial Development Organization. Polycare is also a winner of UNIDO’s 2021 Global Call, for which it was invited as a participant to the COP26 climate summit in Glasgow. Congratulations Polycare, the awardee of the German Entrepreneurship Award for Development 2021!

©Polycare
The Polycare construction system was presented at the Architecture Park in Boisbuchet, France. Meanwhile, the building was opened in September 2022 with a ceremony and workshops for international students, architects and engineers can take place there.